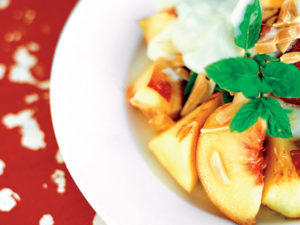 JASON WEINER TALKS ABOUT THE SUMMER MENU AT ALMOND

Jason Weiner reveals the key ingredients on the menu at his Bridgehampton hot spot, Almond.

Like Broadway, each season out East tends to have a name change on the marquee. But Jason Weiner, executive chef at Almond, is a long-running showstopper. Known for his local and seasonal ingredients, Weiner, also a co-owner of the restaurant, delivers an approachable and hearty serving of what the East End has to offer. Whether downtown in Tribeca or at the beach in Bridgehampton, this is a seat at the table you don’t want to miss.

Most-used summer ingredient: Pike Farms’s Silver Queen corn. Once you’ve had it, there’s no settling for anything else. It’s transcendental—we go through four sacks a day.

This summer’s cocktail: Eric Lemonides, the co-partner at Almond, is working on a thing called the Chilly Willy—watermelon, mint, honey, lime, and green chile vodka. All the flavors of summer.

Favorite ingredient: Whatever Dock to Dish dropped at our backdoor that morning.

Go-to kitchen tool: I get asked this question a lot, and it’s always the same answer: the humble rubber spatula. Nothing is more satisfying than squeegeeing a bowl clean.

Who’s at your table? Perfect strangers who become lifelong friends.

What’s on the table? Eggs from Holly [Browder of Browder’s Birds in Mattituck], potatoes from Tom [Halsey of Halsey Farm & Nursery in Water Mill], shishitos from Katie and Amanda [Baldwin and Merrow of Amber Waves Farm in Amagansett], mushrooms from Jane [Maguire of The East End Mushroom Co., in Cutchogue], eggplant from Jim and Jennifer [Pike of Pike Farms in Sagaponack], peaches from Jen [Halsey Dupree of The Milk Pail in Water Mill], radishes from Ian [Calder-Piedmonte, cofounder of Balsam Farms in Amagansett], fish from Sean [Barrett of Dock to Dish in Montauk], oysters from Mike and Mike [Doall and Martinsen, cofounders of Montauk Shellfish Co.], tomatoes from Marilee [Foster’s farmstand in Sagaponack]. You get the picture.

Favorite places to eat: In the city, it’s Roberta’s; out East it’s Nick & Toni’s. Some things are classic for a reason.

Best-kept secret: Marilee Foster’s farmstand. It’s small and unassuming, and you can taste the love that goes into the veggies. Be careful, though—those guinea hens can be a bit agro.

Favorite hidden spot with all the locals: Reggae Sundays at Swallow East in Montauk.

Why Almond has garnered such a following: A handsome and charismatic chef ? Either that or dumb luck.

In your spare time…? Leave me alone; I’m mulching. 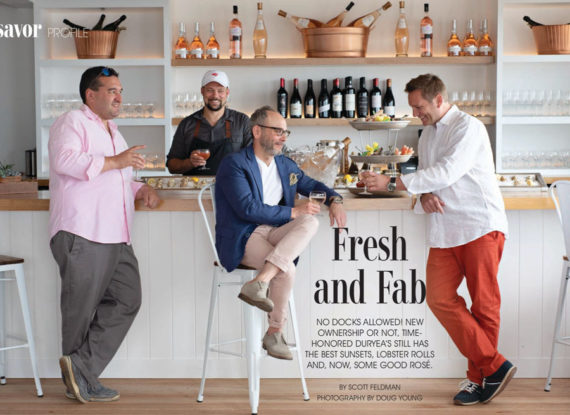