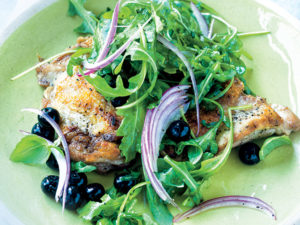 Chef and cohost of The Chew, Michael Symon, grills a perfect summer chicken with a tart blueberry topping.

Michael Symon may have roots in Cleveland, but the Midwesterner is more of a national chef these days thanks to his cohosting duties on ABC’s Emmy-winning daytime series, The Chew. In September he is launching a fourth book, Michael Symon’s 5 in 5 For Every Season: 165 Quick Dinners, Sides, Holiday Dishes, and More! and then following that with a new restaurant, Mable’s BBQ, opening in November in his Ohio hometown. Here, Symon previews one of the recipes from his forthcoming book, which is filled with dishes, including this one for grilled chicken thighs, that he enjoys preparing for friends and family.

Preheat a grill or grill pan to medium-high heat. Season the chicken on both sides with salt and pepper. Drizzle with 2 tbsp. of olive oil and place skin-side down on the grill. Close the lid (or cover, if using a grill pan) and cook until nicely charred and the meat releases from the grill, about 3 minutes. Flip, cover, and grill until cooked through, about 2 minutes. Meanwhile, in a medium bowl, whisk together the remaining ¼ cup olive oil and the vinegar. Season with salt and pepper. Add the blueberries, arugula, onion, and basil, and toss to combine. Taste and adjust the seasoning, adding salt and pepper as needed. Put the chicken on plates, spoon the salad on top, and serve.

In your spare time, you… Garden.

How is your golf game? As good as it needs to be.

Favorite round you’ve played this year? I played a fun round with Flay and [Michael] Strahan—lots of trash talk.

This summer’s cocktail? Arnold Palmer with Knob Creek. Who’s at your table? Friends and family (there has been enough namedropping already)!

This season’s soundtrack? All of [my stepson] Kyle’s new songs.

Why this recipe? I blame—or credit, as the case may be—my friend Tim Bando for getting me hooked on chicken with blueberries. He’s a chef with a great palate, and when he does something in the kitchen, it’s usually for a good reason. He makes a blueberry-style barbecue sauce that does magical things to chicken. This dish plays off those same flavors, just in a different form.

What can we expect next? Riding off into the sunset!